You are in Zagreb and seeking to watch a great football game? You have heard about famous football club Dinamo Zagreb? Here is all you need to know about the best Croatian football club.

First of all, Dinamo Zagreb was established on 26th April 1911. About one month after being established they played their first official game. Soon came the first win and in 1923. they won first national title. The club was called Građanski in that time. It was the most successful Yugoslavian club between the two World Wars winning five championships. The club features its distinguishing urban, typical Zagreb spirit. And also the blue colour, the fundamental characteristic of the club’s emblem.

Dinamo became a member of the state’s ”Big Four”, with Hajduk Split, Red Star and Partizan Belgrade. The club achieved great results in domestic competitions but also great ones in Europe during the 60s. Semifinal of the Cup Winners’ Cup in 1961, final of the Inter-Cities Fairs Cup (today Europa league) in 1963. and finally winning this prestigious trophy in 1967. From the end of the Second World War until the end of the Federal Republic of Yugoslavia in 1991, the Boys in blue from Zagreb collected four leagues and seven cups. 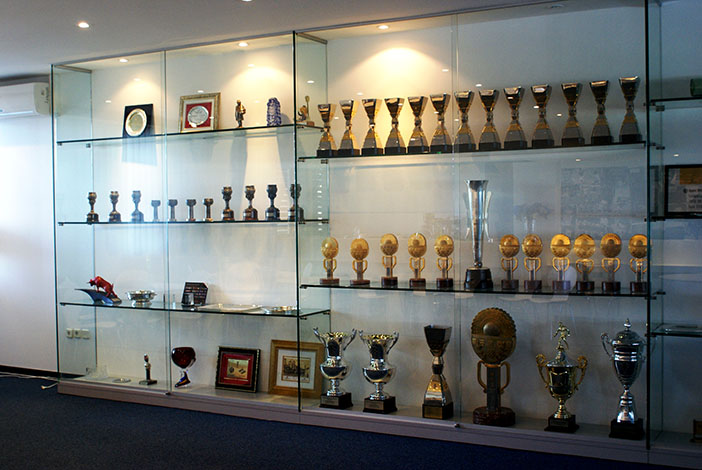 Since the Croatian independence in 1991, Dinamo became the leading club in the country. It was the most successful in the ex-Yugoslavian area. And also one of the most powerful clubs in Southeastern Europe. Dinamo today has 17 league titles in Croatia and 11 consecutive ones. And the successful run doesn’t seem it will stop any time soon. Finally, a new great success came at the end of the 2014/15 season when Dinamo won the double.

Furthermore, Dinamo played four times in the group stage of the Champions League until 2015 (1998, 1999, 2012, 2013). And also many times in the UEFA Cup / Europa league. In those competitions Modri played against some of the best clubs in the world (Real Madrid, Arsenal, Porto, PSG, Lyon). They played against some of the best players in the game (Cristiano Ronaldo, Zlatan Ibrahimović, Iker Casillas). Also, in the season 2015/16 Dinamo qualified for the Champions league group stage again. This says more than enough about the success.

All of the above is even bigger if we know that they were mostly done by players from the youth school. Luka Modrić, Mateo Kovačić, Milan Badelj, Niko Kranjčar, Vedran Ćorluka, Dejan Lovren, Igor Bišćan, Mario Mandžukić and many others started their career in Dinamo. They achieved great things with the club. They achieved great things with  Croatia national team and also with their respected foreign clubs.

Most noteworthy, next to the stadium is the famous Maksimir Park. You can enjoy a relaxing walk, beautiful nature and even visit the ZOO.

Dinamo’s Youth Academy is one of the most successfull football schools in the world. There are 11 young selections. And also cca. 250 registered players at this time. Furthermore, best of them in every selection have opportunity to prove themselves during the career. The main goal, of course, is to play for the first team in the future. Some of well-known players who started their career in Dinamo’s Youth Academy are Alen Halilović, Luka Modrić, Dejan Lovren, Vedran Ćorluka, Mateo Kovačić, Niko Kranjčar. The most talented players from U-17 and U-19 selections have a chance to show their quality by playing for the first team.

The story about Alen Halilović

One of club’s biggest stories is the story of Alen Halilović. Hestarted his career as a young boy in the Academy. He played for all youth selections and with 16 years and 3 months became the youngest player who debut for the first team (at that time). After great games in Dinamo’s jersey his talent was recognized by FC Barcelona. Famous club decided to give him a chance to show his quality in their B squad.

Also, there is a brilliant result achieved in 2013 when Dinamo’s U-15 team won Manchester United Premier Cup, the strongest U-15 competition and unofficial U-15 World cup.

If you are looking for a blue souvenir from Zagreb, regarding the Dinamo football club or the Bad Blue Boys (official fan-club), you are welcome to visit official Dinamo’s webshop or their store in the Zagreb City Center or at the Maksimir Stadium. You can buy various things from T-shirts, accessories, jersey and much more.

Tickets for the upcoming matches are available at the Stadium or on their official website shop. You can buy tickets and enjoy a great and fun day with your friends and family. Watching a game is really exciting and an amazing way to spend your free time in Zagreb.

Bad Blue Boys are an ultras group. They support the Croatian football club GNK Dinamo Zagreb and also Futsal Dinamo. Bad Blue Boys (BBB) were founded on 17 March 1986 in Zagreb. Their members are from different areas of the city. The name of the group is said to have been inspired by the 1983 film starring Sean Penn, Bad Boys. Their mascot is a bulldog and their official anthem is “Ja volim dinamo” (“I love dinamo”). At home matches in Dinamo Zagreb’s Maksimir Stadium, the Bad Blue Boys are located in the East Stand.

Certainly, there is no doubt that this is a must-see, and a must-feel in Zagreb!

If you’re searching for refreshment in Zagreb and want to escape from ...

Top 10 Zagreb events in May

With beginning of may events in Zagreb flourish like flowers in Downtown ...