Come and see the spectacle of the gladiator fight which organizes Archaeological Museum of Istria in Arena.  Spectacla Anticqva Pula Arena is one of the top summer event in Pula. Participants are fighters – gladiators who regularly train for combat and will take you back to the history of ancient Rome. After the show you can take a photo with gladiators or buy unique souvenir. Gladiator fight spectacle is interactive play.  After you enter the Arena you will see actresses – “night ladies of ancient Rome”, jugglers and firefighters  who will welcome you. Experience Pula as a true citizen of ancient Rome and enjoy the fiery battle of real gladiators. Spectacvla Anticqva Pula Arena is your best summer choice for entertainment during your Pula vacation!

Summer in Pula ought to be very fun and rich  with cultural events.  If you are spending you summer holidays in Pula – you have to experience  Pula as a real citizen of  ancient Rome.  Mix of entertainment and culture  is perfect match if you are a tourist in unknown city – spectacvla Anticqva is  perfect show that will take you on real historycal journey trouht the time of ancient Rome.

Stars of the show – real fighters from best gladiator school in Pula “Spectacvla Gladiatoria” -“Ludus Histrus” (Gladiatour Spectacle – Histrian sport) with a long experience of fighting in the Arena will show you their skills – we remind you that the fight is real and you can see that by bruising and bloody wounds – alive!

Show is interactive play, and there are not just fighters – all spectacle is supported with professional actors and presenters, as well as the jugglers and glittering fire. From the very beginning you will met young and beautiful ”night ladies – actress” so you can taste the spirit of ancient Rome.

Actress who tell you the story of Ancient Rome while you are waiting for gladiators.

Introduction to the play can be really interesting …

Battles were not limited only to the male gender …Each gladiator has its own name and its weapons. In the beginning  of the play you will meet each of them and decide for your favorites. Here you can vote, shout, roar … Whatever you want!

Spectacvla Anticqva is interactive show, you can wobble for your favorite …

Just like real citizen of ancient Rome – you can enjoy in bloody battles and vote for the life of gladiator. If you want him alive you have to shout misum (mercy), but if you want him dead then say jugula (death).  Roman emperors let people to vote for gladiator’s life, but in the end they would made a final decision… 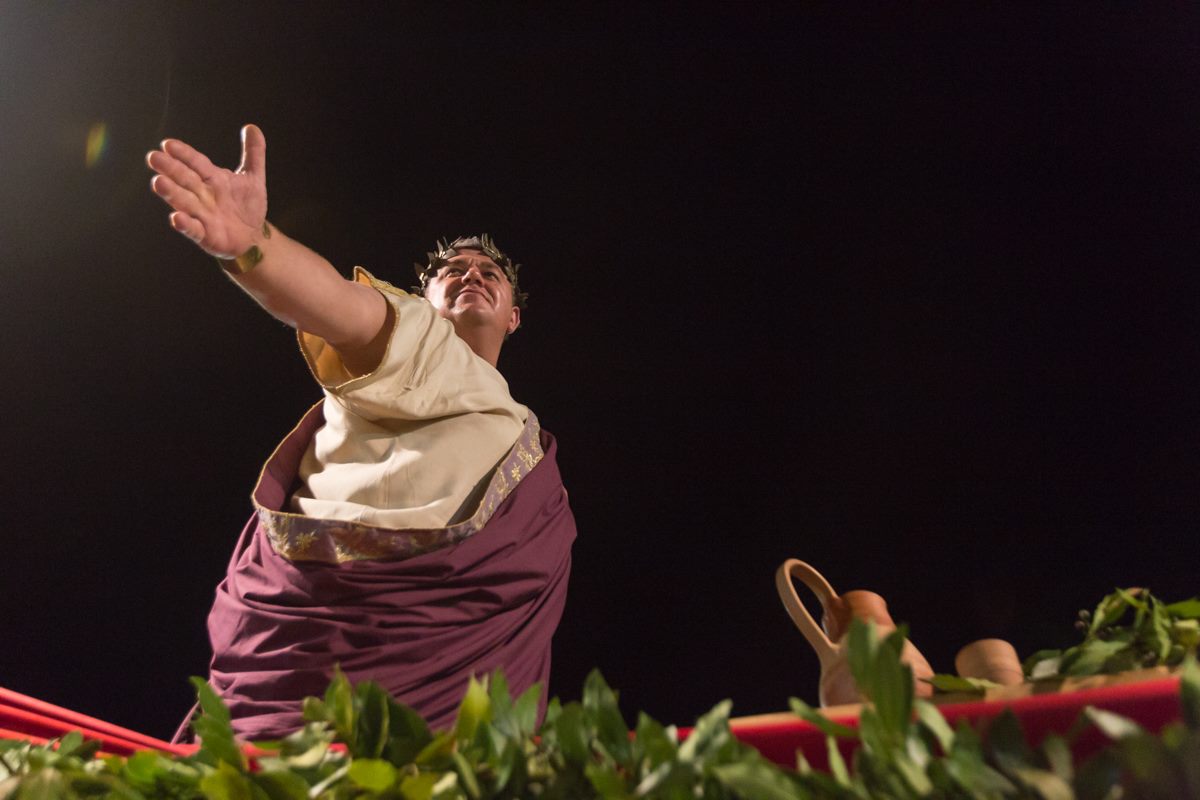 Gladiators were slaves and they used to train for entertaining people. Only some gladiators would be able to earn their freedom – but most of the battles were futile . Only the emperor could give a freedom to the gladiator. Emperors  punished gladiators even for the smallest mistake by torturing or smashing the head.

The villain who smashes the gladiator’s head above…

After the fight feel free to come on the Arena’s podium, and take a photo with a fighters or actors. Buy a souvenir that you like. Just experience the true ancient Roman spectacle!

And in the end of Spectacvla Anticqva you can have fun with your favorite gladiator, they are available for photos, as well as other actors in the show …

Spectacvla Anticqva play every year in Pula Arena- throughout the summer season –  in the evening hours.

Other Local tips in Pula

Fort Kaštel – your first choice for amazing view on Pula city center and ...

Top 5 Events in Pula If you are relaxing and enjoying your holiday, check ...